Diffusion is the process of spreading an innovation in a society. Generally, the word ADOPTION is used by some to denote the diffusion. The word ADOPTION means a kind of acceptance; but adoption is used to denote the acceptance of a new idea or situation by an individual. When each and every individual accepts and uses the innovation, it is called adoption. Here the person is called adopter. Don’t get confused with the two words - Diffusion and Adoption.

Adoption is an individual process of accepting an innovation. But diffusion is a social phenomenon. Diffusion signifies a group of people or society and suggests how an innovation spreads in society. When all or more individuals in a society adopts an innovation, it is called diffusion.

People are different in behaviour and all cannot adopt the innovations in the same way. Some persons are ready to accept the innovation very quickly, but some others hesitate to go for a new idea or product.

Based on the degree to which an individual adopts the innovation, the adopters have been categorised into five different types. They are innovators, early adopters, early majority, late majority, and laggards. 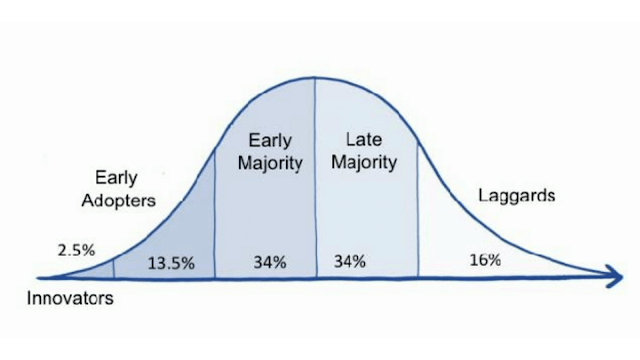 Innovators: Innovators are venturesome people –They are willing to take risks, have financial liquidity and interaction with other innovators. Such people come forward to use the new idea as a challenge. You might have seen people who wants to see the fils in the releasing day itself. Or there are some people who purchases the brand new smart phones in the launching day itself. As per studies, such innovators belong to 2.5% of the customers.

Early Adopters: An early adopter is a person who embraces new technology before most other people do. The term early adopter refers to an individual or business who uses a new product, innovation, or technology before it becomes widely known or used.  These people are also interested in buying the new products without delay. They make up roughly 14 percent of the population.

Early Majority: early majority comes after innovators and early adopters. Such persons are ready to make use of new technology after observing its nature and functions. This group consists of 34% of population.

Late Majority: They adopt an innovation only after a majority of people have tried it. They may have below average social status and little financial liquidity compared to early majority people. This group consists of 34% of population.

Laggards: They are the last to adopt an innovation. These individuals typically have an aversion to changes. Laggards typically rely on "traditions", and usually in contact with only family and close friends. 16% of population is consisted of laggards.

Popular posts from this blog

- July 31, 2020
ETHICAL ISSUES IN ADVERTISING Advertising means a mode of communication between a seller and a buyer. Ethics in advertising means practicing a set of well-defined principles which govern the ways of communication taking place between the seller and the buyer. An ethical ad is the one which doesn’t lie, doesn’t make fake or false claims and is in the limit of decency. Though there are many benefits of advertising, there are some points which don’t match the ethical norms of advertising. Nowadays, ads are more exaggerated and a lot of puffing is used. Sometimes the genuine consumers may get confused, whether to believe the claims in the ads or not. The advertisers usually claim that their product is the best, having unique qualities than the competitors, more cost effective, and more beneficial. But most of these ads are found to be false, misleading and unethical. According to Vatican, ads should follow three moral principles - Truthfulness, Social Responsibility and Upholding Hu
Read more

- July 27, 2020
four views on consumer decision making and consumer decIsion making models Decision is the selection of an action from two or more choices. Generally, decision making is regarded as a cognitive process of selecting one from two or more alternative choices; because it is argued that we usually take decisions, after properly evaluating the situations and circumstances. However, there are four different arguments on this. This is known as Four Views on Consumer Decision Making . These are Economic view, Passive view, Cognitive View and Emotional View. The four views explain why individuals behave as they do. The views are also called as Models of consumer decision making. They are Economic Model, Passive Model, Cognitive Model and Emotional Model. Economic Model/ Economic View Economic model is a rational model. As per this view, consumers make decisions in a rational manner, after considering everything about the product. Here, the consumer, examines and evaluates the benef
Read more

- July 30, 2020
OBJECTIVES OF HOSPITALITY INDUSTRY   To provide maximum satisfaction to the guests To give personalized service to the guests To improve quality of service continuously To find new ways for providing satisfaction to guests To promote travel and tourism To provide maximum employment opportunities To help the nation to increase foreign exchange earnings To improve international relations To give better image of the nation among other nations
Read more

JNJ CLASSES FOR COMMERCE AND MANAGEMENT